Rum Run Is Done! Like Really Done! Like Seriously, For At Least A Long While! Kangaroo Jumping Game! 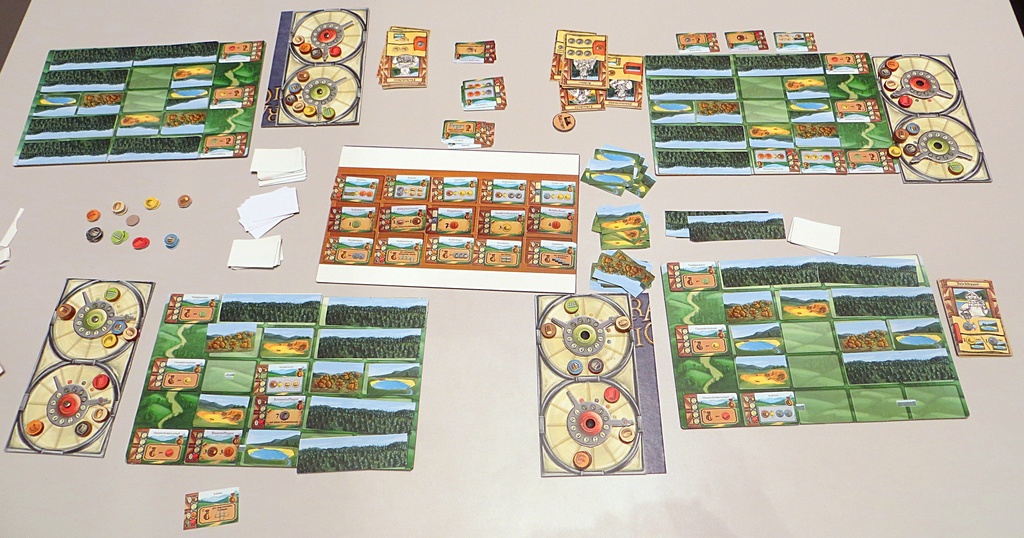 I’d like to start doing more of these! After all, my main driver for creating games is feeling inspired after playing someone else’s well-designed game, so yes, let’s talk about Uwe Rosenburg’s Glass Road. It came out a couple of months ago in November 2013, the same month as his behemoth sequel to Agricola, Caverna: The Cave Farmers.

I think it’s wonderful that these two games were released so close together. I’m a huge fan of Agricola, but I have not played Caverna. However, my understanding of the game is that it’s like if everything you did in Agricola was your day job, and then there’s other stuff your family members get to do that’s like going on weekend adventures. That all sounds dandy, but my initial reaction to that was oh-my-god-Agricola-has-enough-going-on-why-would-you-add-more? But hey, I haven’t played it, so who am I to judge?

I bring this comparison up only because Glass Road’s biggest surprise is its simplicity. How cool is it that Uwe could develop an incredibly complex game and an incredibly straightforward game in tandem? Glass Road takes 10 minutes to set up, has a couple elegant mechanics in place, you bend your brain around them for about an hour over four identical building rounds, and then the game is over. I’ve played the game three times now (with 2 players each time), and I’m still kind of in shock at how straightforward it all is. I mean, it’s an Uwe Rosenberg game! You’re supposed to feel overwhelmed by the insane juggling act of 30 different game elements, and then end in the middle of that adrenaline rush hoping that you accomplished something.Instead, Glass Road had me constantly wondering ‘is that it?’ but you know, in the best way possible. There’s a ton of strategy to be had here. Allow me to explain the game: 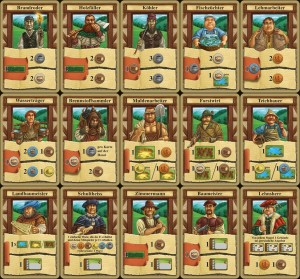 To start, each player has an identical deck of 15 ‘specialist’ cards at their disposal that do things like give you goods or build buildings. The game is played over 4 building rounds, and at the beginning of each round, each player picks 5 specialist cards, plays 3 of them, then hopes that another player picked the remaining two, as that will give them a free action and reduce the actions of the opposing player. Goods are tracked on two production wheels: one is for making brick and one is for making glass. In addition to those ‘refined’ goods, you have a bunch of basic goods. Refined goods are made automatically whenever you have one of every basic good on that wheel (and you lose one of each of those goods in the process). What do you want to do with those goods? You buy buildings to fill up your little Agricola-esque piece of land. Those buildings fall into one of three categories: conversion buildings which let you turn one type of basic good into another at will, immediate buildings that give you a one-off benefit, or victory point buildings that simply help you win (like the buildings in Puerto Rico). 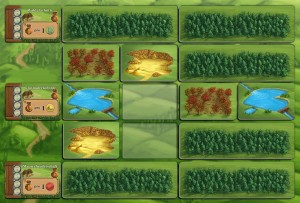 That’s it. You pick specialist cards, get goods, build buildings, rinse and repeat 4x, then hope that you’ve managed to string together enough complementary elements to achieve more victory points than your opponent(s). Deceptively simple.

I’ve played three games. The first game, Morgan and I tied with 12 points each. In the second game, Morgan beat me 21 to 17.5. In my third game against Liz, she beat me 19 to 13. I should have managed many more points in that game with Liz, but made the mistake of buying an expensive building that would give me a lot of points for my leftover glass, but then I didn’t have any glass leftover. I’ll admit the first couple rounds of this game you’ll feel a little lost– ‘do I want to build more ponds?’ ‘How important is charcoal?’ ‘Wait, why is this building so expensive?’ But by the second time you play the game, like John Nash you’ll start to see invisible lines being drawn between certain buildings and specialists. “Ah…” you’ll say. “If I get that building which allows me to convert wood to clay then get that other building that gives me a bunch of victory points for my clay, then use my clay engine to get more brick, I’ll be solid.” 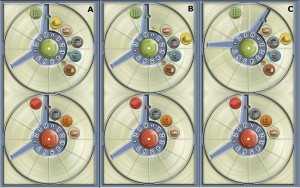 One final word on the production wheel; it’s a super cool mechanic but it definitely stretches your brain; you’ll have more than one instance where you forget to factor in the loss of your basic good when producing a refined good to make a purchase. Here’s the easiest way to think of it, even though it’s a little different from what the visual of the production wheel suggests: one of every basic good gets you one refined good, but the trick is that you have HAVE to create a refined good at that point, even if you don’t want to. Sometimes you’ll even make multiple refined goods at once! 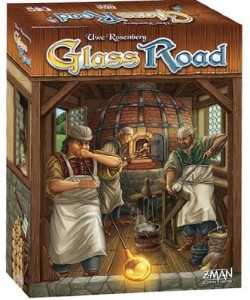