Wowsers~! Here we are. 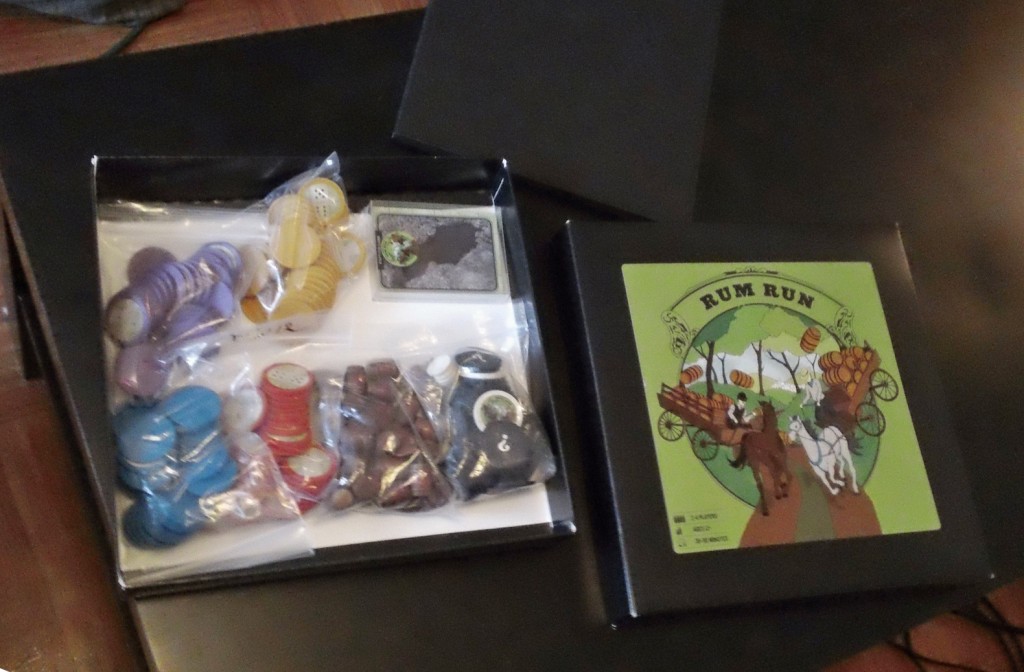 I’m pretty thrilled with the quality of everything. The artwork from Morgan and Lindsay is beautiful, the board is superb, and all the new pieces are just as high quality as I hoped. Also, I’m glad Liz talked me into replacing the ‘green’ tiles with ‘purple’ tiles; they’re very pretty. And I love those token pieces in general– I could just eat em up! 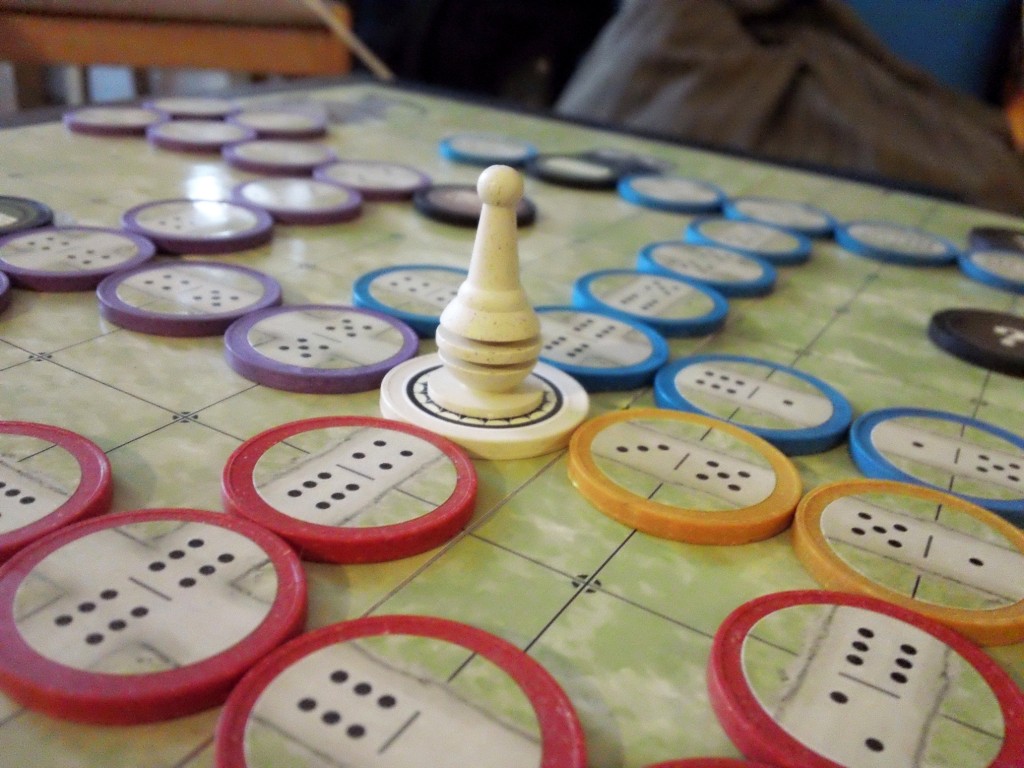 There were a couple little things that irked me. Bits of the sticker edge on the board were ripped, the two sides weren’t quite aligned, and they seem to have been printed on different printers since the color changes a little bit from one side to the other. Also, the logo that says ‘Rum Run’ on the board is cut in half by the divide, so maybe I’ll rotate that 90 degrees from now on. Also, in the fold of the board we lose about 1/4″ of grid real estate. And some of the distillery cards printed maybe 1/8″ off center. And they flip in the wrong direction from what people find intuitive. But whatever– it all turned out great and I can’t imagine anyone would notice these ‘issues’ except for me.

Oh, but there’s also this: 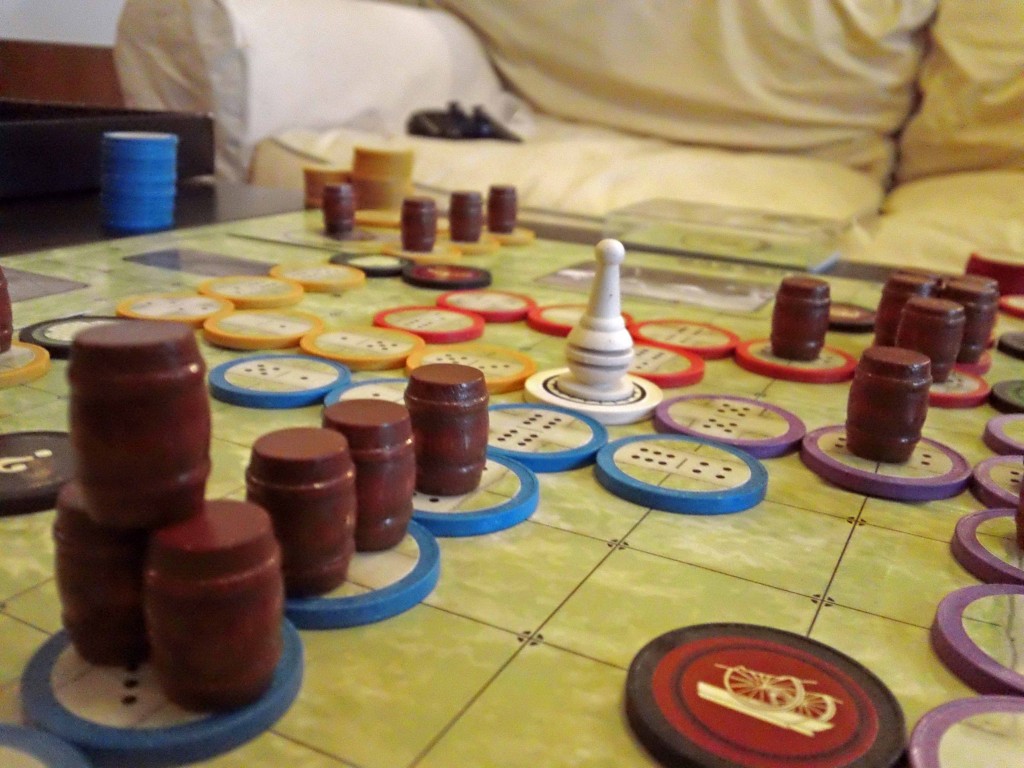 Those barrels are huge right!? Maybe it’s just me, but I was a little thrown off by them being a different color from how they look on the website and also a lot bigger than I expected. That being said, they’re quality painted wooden pieces, and they’re very stackable (unlike mancala gems). Morgan and I are talking now about the possibility of replacing them with little cylinders. It would lower the cost of the game by a couple bucks, and also allow us to shrink the holding areas of the distilleries. The only downsides: they’re super abstract and the color choices are not ideal. Not sure on this– feel free to voice your own thoughts. 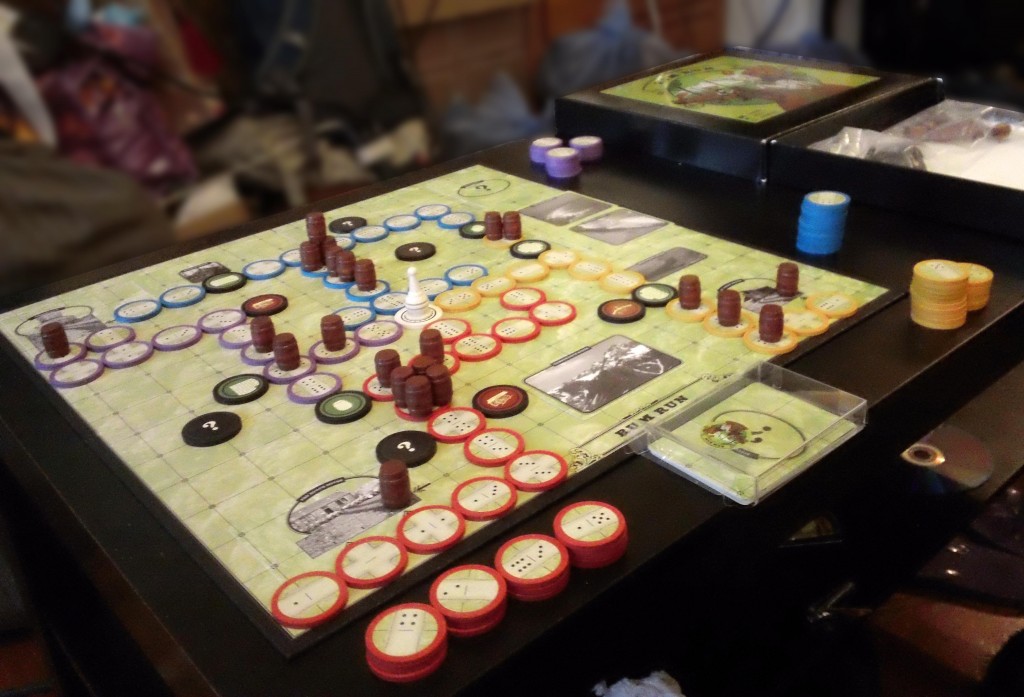 Oh yeah, and we’ve been playing the game too. Some random notes on that:

Finally, after playing a lot of Portal 2 recently, I came up with the brilliant notion to have a one-player version of the game where you solve puzzles. It’s great for fostering the thinking you’ll need in for potential scenarios against human players, and it’s fun! I want the rulebook to have a 10-puzzle campaign of increasing difficulty, and then somewhere on this website I’ll also set up a page where people can post their own. The idea is simple: using the 10 highest ranking pieces (3-3 through 6-6), get from the Town Center to the barrel(s). On the way there may be obstacles, opponent roads, and/or free roads to help you on your way.

Here’s a picture I took of a puzzle I made while watching Shakespeare in the Park (hence the weird lighting): 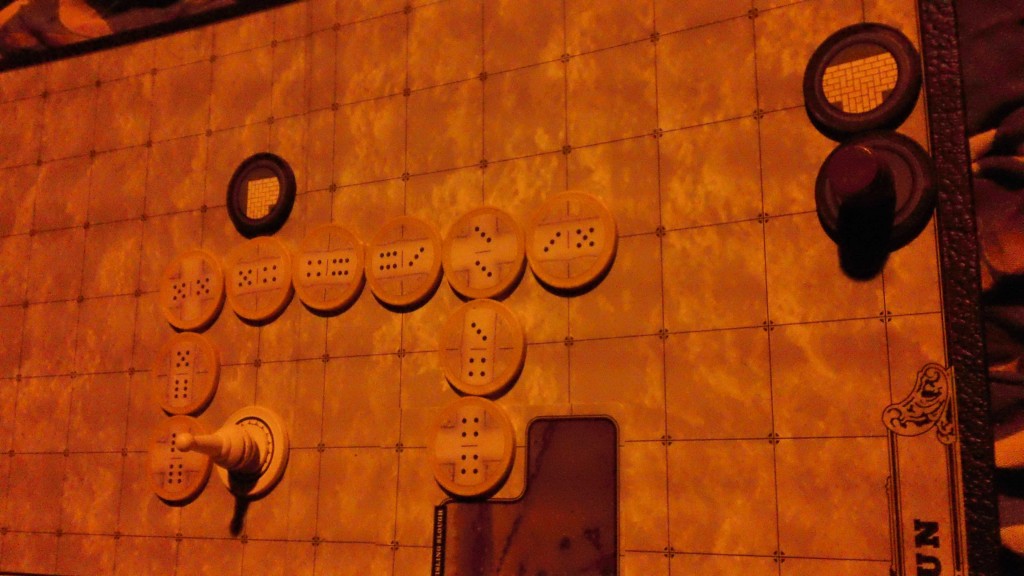 Which pieces in which order would you use to get from the Town Center to that luscious barrel?

That’s all for now folks! Check back periodically for updates on the rules. Morgan and I are back to Skyping every Monday, so hopefully we can have a beautiful and complete official release by the end of the summer. Of course if you’re impatient, I’m happy to give you the secret link to the game and you can buy an advance copy without the rules. Heck, you could even look at the old rules and you’d figure it out. But the new rulebook will be pretty. Really pretty.