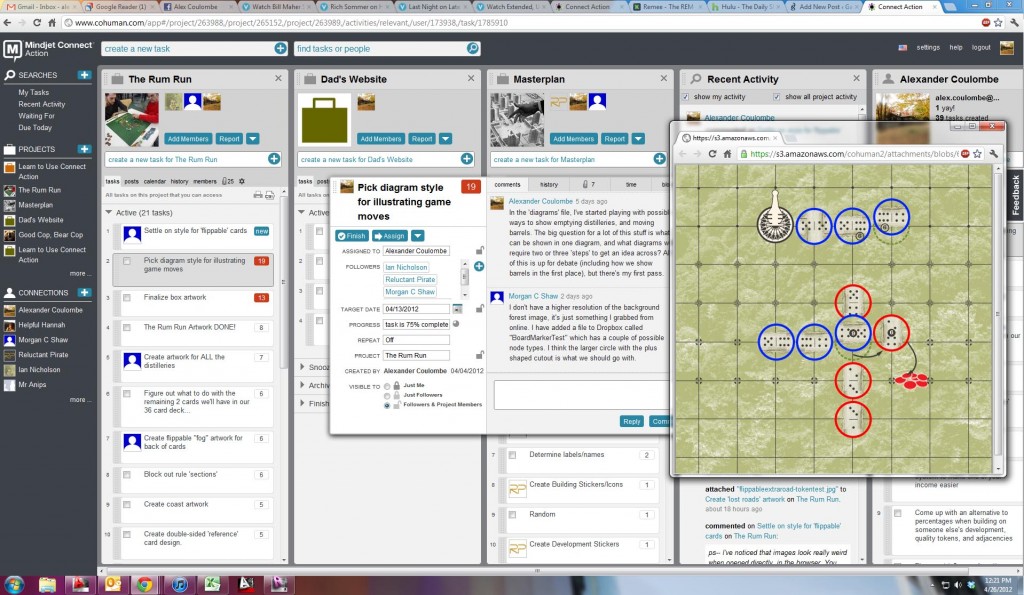 It’s funny– you would think that since I’m living in NYC and surrounded by plenty of super-talented people, I’d be actively seeking them out as collaborators. The truth is I’d already met so many incredible designers, artists, editors, and feedback…ers before moving here that, well, it just seems silly to seek out unknown quantities when we live in an age that allows us to harness the internet as such powerful connective tissue. 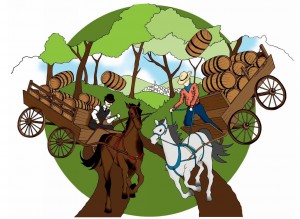 So… Ian Nicholson, Elizabeth Bull, Lindsay Davis, Daniel King, Danton Spina, Morgan Shaw. This is my team. And I speak to them in many ways. Lindsay, as you may remember, is working on the box-art for The Rum Run, and I communicate with her primarily through Gmail. She sends me an updated design, I show it to others on Skype, then provide her with feedback over Facebook.

A few months ago, Dan King and I started doing ‘Masterplan Mondays‘ as a way to push each other as we collaborated on the TGC re-imagining of my very first game, Masterplan. So every Monday, we’d log onto Skype at 7:30 and discuss what we’d done, where we were going, and how to do it.

That died off for a bit, but then came back in full bloom with Morgan Shaw as a firey new collaborative force. Morgan originally started off giving us color advice on Shima through Gmail, and then had blown me away with his off-the-cuff reimagining of Rum Run, prompting me to put on hold the nearly-complete Redux Deluxe Edition.

So now, every Monday, we’re talking about Masterplan and Rum Run on Skype. And we’ve added new internet tools– we use Cohuman to organize tasks that need completion and showcase idea ‘testing’, and we use Dropbox to organize all of our artwork, files, rules, notes, etc. We present, discuss, refine, go off for a week, then come back. Rinse and repeat.

And for a quick fix, say, when you’re at a simple loss for words, you can source your entire social network. I couldn’t think of good names for distilleries in Rum Run, so yesterday I posted a status update on Facebook as such “Contest! I need suggestions for names of distilleries. This is for my 1920s Prohibition-era game, The Rum Run. The distilleries range in type from tents to farmhouses to cabins, and are all hidden in the forest. Here’s your chance to make BOARD-GAMING HISTORY!” Now I’ve got some excellent names to source from: Old Sol, Rotgut, Southern Spirits, and Kennedy’s to name a few.

Now here’s the REAL funny thing– with all of these feedback loops and collaboration and refinement, it takes a lot longer to actually get something done. The original Rum Run– rules, artwork, and all– took less than a month to finish. It wasn’t perfect, but it worked, and hey, it won a competition. And that ain’t nothin’. Personally, I’m thrilled with the quality product that Rum Run Redux Deluxe is turning into, along with what Masterplan will likely be a few months later. But boy, what a wait. Both of these endeavors started back in November, and here we are almost in May of the next year, still chugging along, aiming for a finished product with beautifully redesigned artwork, rules, and all sorts of bonus pieces and extra play-styles that will add hundreds of hours to the potential life of the game. In theory.

What I keep asking myself is this– is the time well spent? I enjoy this refinement process, and I love working with these people, but we live in an age that would rather get a moderately well-designed product NOW, rather than wait a couple months for something more polished. Look at youtube. Look at webcomics. Looks at flash games. Now think about the difference between that which is led by a single person, and that which is designed by committee. Andrew Stanton with John Carter, Hideo Kojima with Metal Gear Solid— these are (perhaps too) singular visions. But then on the other end of the spectrum, you have projects like, oh, say, Terra Nova.

What if I had simply declared the initial version of Rum Run as ‘good enough’ and focused all this time and energy on other new projects, and my collaborators had done their own things?

I guess it’ll take some hindsight to be able to say for certain. Right now the plan is to have everything but the rules done for the new Rum Run by the end of the month, and the game published for mass consumption before June. We’ll see…

But what do you think? In this day and age, is that extra level of polish relevant anymore? Or if people ‘get it’, is that enough?

One Response to Cohuman, Skype, Dropbox, Gmail, Facebook, Join.me, …what a world