The Rum Run with 2 Players is Officially AWESOME… and more 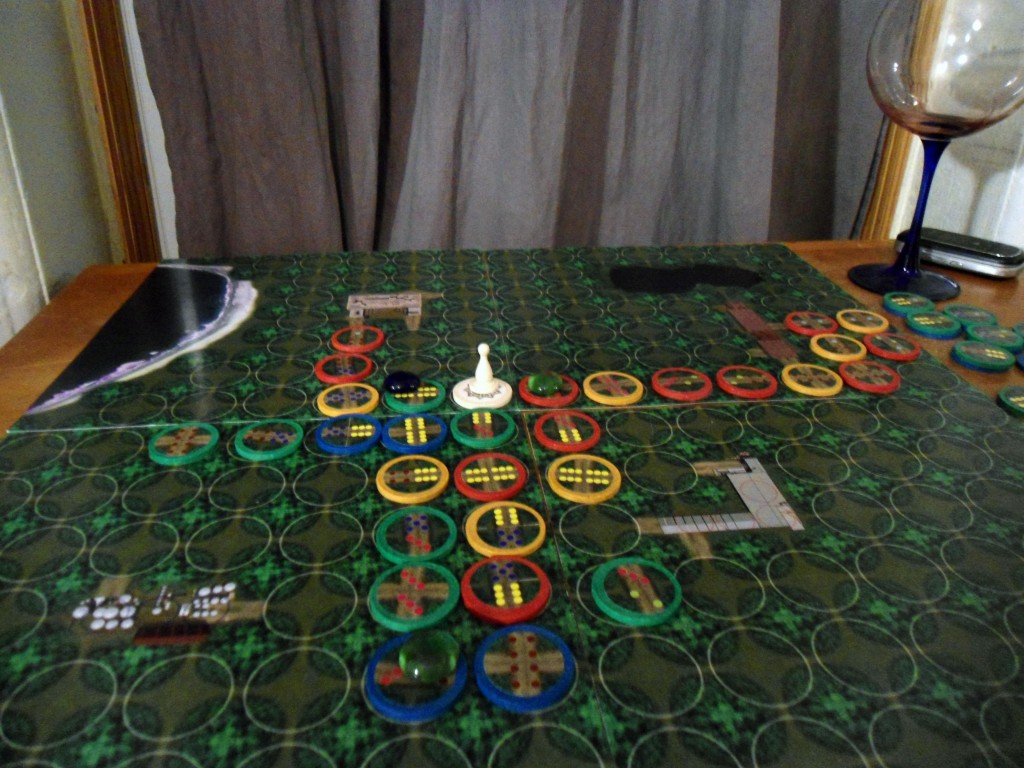 So a funny thing happened the other night. I played my first full game of The Rum Run with 2 players with the most updated rules (and wine!). And I don’t know what it was, or which newly-massaged rule helped things finally click into place, but I do know this– it was a superb game.

Well, the second game was. We decided to play to 12 barrels, and in less than 10 minutes, Liz had me in checkmate. Ugh, strategy rethink. You have to approach a 2-player game entirely differently, because when each player has 2 colors, things move FAST. After all, you can play up to 3 roads in a single turn. For example, you can put down a 6-6, then your second 6-6, then  a 6-5. This also allows you to make U-turns. In some cases on the board we played, one turn was all it took to go from the Town Center to a distillery.

So here’s the rob: the first player has a HUGE advantage.  We decided to try the game where the player who goes first doesn’t get either of their 5-5s. That seems like a HUGE disadvantage, but it actually seemed to balance out well. Our second game lasted about 40 minutes, and I beat Liz by literally ONE turn. It was pretty epic. I loved how our powerful roads moved around as the game went on, and the sneaky ways we both found to ambush each other and steal barrels (and then in some cases, steal them back!).

Don’t get me wrong, I still very much enjoy the 4-player version of The Rum Run– that’s a thinking man’s game, like Chess or Go. This, however, was like Bouncy Castle Boxing after eating a pound of chocolate. INTENSE.

To give you a sense of how the board changed over the course of the game, here’s a picture about halfway through, compared with another at the end. Note that running out of roads was not a concern here, and note how Liz’s final barrel wants soooo very much to make it to that Town Center. But it didn’t. Bwahaha. 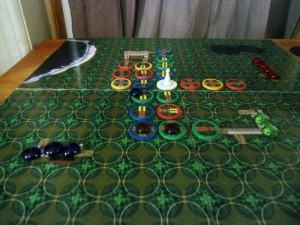 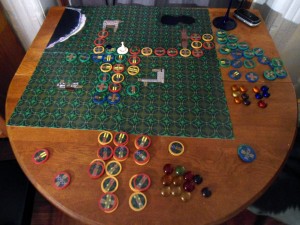 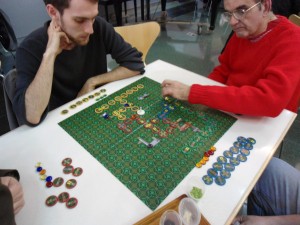 In other news, here’s a game Ian played with complete strangers at a board game meetup at the Citicorp building in Manhattan. It was good to have some older individuals give their take on the game– most notable critique: numbers and distillery entrances were hard to read. Because these are the two most important elements in the game, nothing should overshadow them. Fair enough. 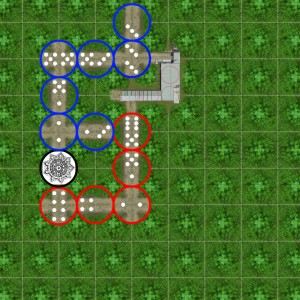 Taking this to heart, and the fact that I want the game to be the best it can be when I release the deluxe edition, I sought the advice of the always-enlightening Morgan. I’ll have a fuller post soon, but here’s my first mockup of a redesigned board/tokens based on his knee-jerk reaction. Key thing is that all the numbers are white and the forest is a globular mass instead of discrete trees. For the numbers, Morgan pointed out that in  a set of dominos that goes above 6, the colored numbers are useful against a backdrop of white to quickly recognize value. However, in a game like this full of color, it would be more clear to have the numbers all white. I tend to agree with him.