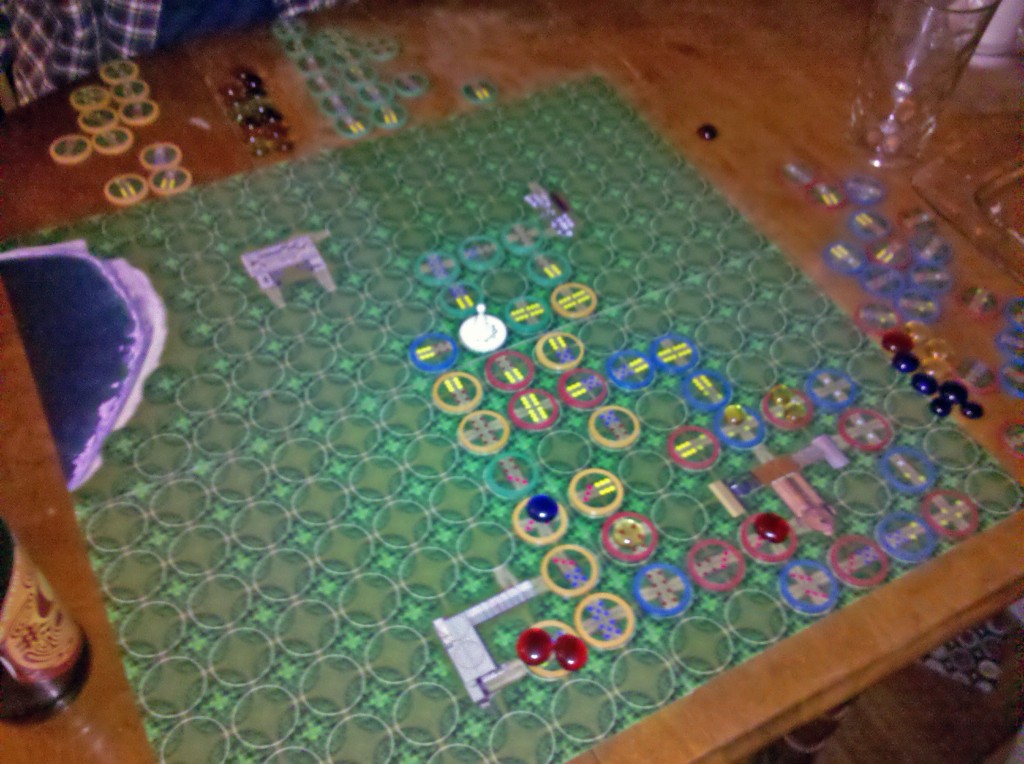 Again, prepping for the Deluxe Edition of The Rum Run, I’m trying to fine-tune the game in as many ways as possible. Just to make sure it wasn’t a fluke, I tried another 2-player game, this time with Ian. Ian played as green and orange, and I played as blue and red. Yes, it was still awesome, but this one took a lot longer– closer to two hours. I have a couple thoughts on why this happened:

Having two 6-barrel distilleries, in my opinion, kind of screwed up the hierarchy of the game. First of all, it made going first slightly less auspicious, so the handicap of not having the two double-fives felt more out of whack (compounded more by the much-longer game). Second, because there wasn’t only one glorious 6-barrel distillery to fight over, there was a lot less conflict early on. ‘Oh, you’re going for that one? Well I’ll just go for this one then.’

Too much of the early game was just the two of us transporting barrels back to the Town Center without feeling much desire to attack each other– the importance of the individual barrels was lessened. Following Ian’s ‘algorithm’ of determining the endgame condition by taking the total number of possible barrels in the game, dividing by the number of players, then adding 1, this game was played to 16 barrels:

So we reached a point where Ian had transported all possible barrels from the side of the board he controlled, but still needed a few more, so at that point he finally decided to attack me. The game definitely got exciting at that point and there was the usual mix of each of us thinking we were trapped, then coming up with an ingenious solution, then thwarting each others’ genius solutions. 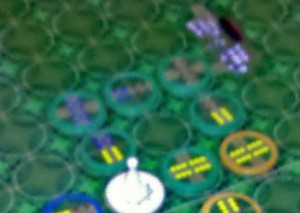 Now in previous games, that loop (green and orange, both his colors) would have been locked in for the entire game. The distillery doesn’t matter, but you have seven roads in a looped square essentially locked into each other (helped by the Town Center), so none of them are loose. However, the rules for breaking your own road are essentially just that everything needs to match up when you’re done (you don’t need a higher-number road to break your own). So what happened was, because Ian wanted to be able to use his 6-6’s, he broke his orange 6-6 by placing a 6-3 off his 6-4. This, he argued, was okay because everything still matched up– 4-6 matches with 6-3, and now the green 6-6 is simply loose because its only attached to the Town Center. Fair enough, I guess. Thus, he was returned his orange 6-6, and his green 6-6 was free to move. Now he had his most powerful pieces back and was free to wreak havoc.

I guess all this could have been avoided by simply stating outright that you can only break your own roads by intersecting them with a ‘new’ road (like you would with an opponent’s) and you can’t break something in the middle, even if everything still matches up. Still, I don’t like the thought that if a player creates a loop like that (which in many ways is a good strategy and thus isn’t uncommon), it completely locks in those roads with no chance of freeing them.

Anyway, with each of us breaking our own roads even more than each others’ and utter chaos ensuing, about an hour later, Ian was finally able to emerge with a clean, near-unbreakable road far off to the side which connected back to the Town Center, buffered nicely by strong supporting pieces. And so, I wasn’t able to stop him from returning the last pieces he needed, and so, he is declared the all-magnificent Regent of Rum. It was a solid win, but I feel it took much too long to get there, and things definitely felt out of control at one point.

Now this will require more testing, but I think to keep a game from being a virtual stalemate of endless road changes, the loose roads need to be a little less, well, loose. Your own roads need to be a little less breakable. Maybe once all distilleries have been emptied once, loose roads can no longer move. Maybe you’re not allowed to break your own roads at all! Maybe breaking your own road needs a larger road, just like with an opponent’s! Maybe the rules regarding unmatching crossroads next to each other needs to change! I DON’T KNOW!! I’M JUST A SMALL BOY LOST AND ALONE IN A FRIGHTENING WORLD FULL OF SLOWLY-DYING TROGLODYTES!

What do you think?