Rum Run Redux Deluxe: Artwork on the Way! The Rum Run with 2 Players is Officially AWESOME… and more

Alright. My first official post about Masterplan. This requires a little bit of setup, since unlike everything else on the site so far, Masterplan has been with me for a while. It was my first foray into game design back in college using spare architectural parts, and it is the reason Dan King introduced me to The Game Crafter in the first place. The process of bringing the game into its first mass-produceable edition has been a long time coming. We’re not there yet, but here’s a little timeline to give some background and hopefully, by comparison, provides some insight into your own design process.

May 2008— While making the architectural model for Greenbox, my curtain panels leave me with a bunch of extra thick pieces that for some reason, I can’t bear to throw away. I have vague dreams of turning them into pieces for a game.

June 2008— Roomates Ian Nicholson and Morgan Shaw talk about a project by MVRDV they saw while abroad that they described as ‘an urban boardgame.’ What I imagined it to be was nothing like what it actually was, so I set to work on what I had hoped it was.

July 2009— While working at VIP Structures, I used my free time (lunches and the like) to eventually craft the bare bones of a city-building game that combined elements from several other games I was enjoying at the time. From Puerto Rico, I took the idea of choosing roles that allow everyone to do something (but something extra special for the chooser). From Monopoly, the idea of purchasing and developing houses. From Settlers of Catan, different land tiles with different properties and an infinitely reconfigurable board. From the computer game Spore, increased/decreased income from developments based on adjacent zoning. Morgan came up with that great title, Masterplan.

August 2009-May 2010— I print the game on a variety of spare architectural model parts, and construct elaborate prestige/hype counters at work (with permission) using the marketing department. I begin playing it with roommates. Then, as we have our famous ‘Boardgames and Booze’ parties throughout the year, I share it with a wider variety of people. Feedback is solid– people enjoy the game. Eventually, we even get one of our favorite professors, Brian Lonsway, to play the game with us. Very cool. The game is destined to go dormant for a while, but we do produce this rulebook. 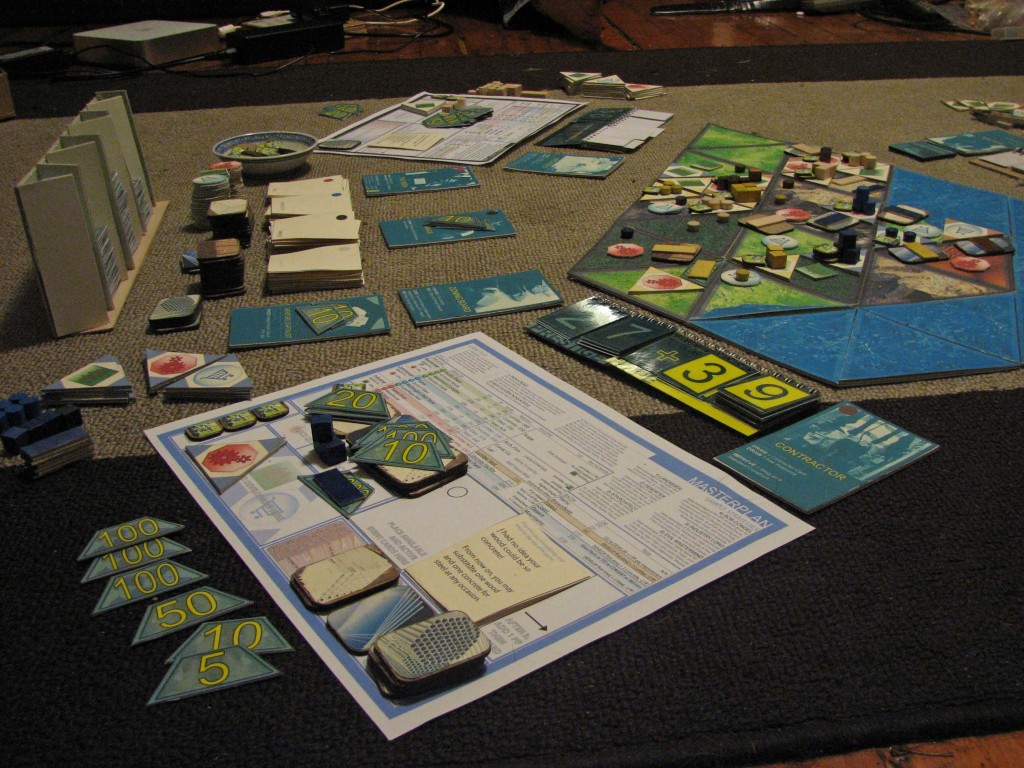 February 2011— Dan King gets me excited about a website he’s just heard about called The Game Crafter. He doesn’t think it has much potential for creating something as elaborate as Masterplan yet, but suggests I check it out. He says maybe I might try making a card game or something?

November 2011– After completing The Rum Run and Shima, Dan asks if I’d be interested in working on a TGC version of Masterplan. He already has a few ideas floating around (and even some artwork!) so of course I’m thrilled to work with him. 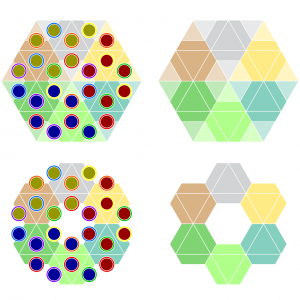 December 2011— The Game Crafter starts selling Hex pieces. Unfortunately, Masterplan functions on an infrastructure of triangles. Still… could be simpler than cutting all the triangles out of mats. Dan thinks we could get away with having the corners of the triangles implied, and mocks up this. The circles are the size of the standard tokens, with the inside of each denoting different zoning types. Still very diagrammatic.

January 2012— We start up ‘Masterplan Monday’ and meet over Skype once a week to discuss current design direction. One notable decision was to have all development/buildings to be represented by double-stickered tokens  instead of the cube/cylinder/octboxes in my prototype. Another was to denote zoning by small triangle that can be placed in the corner of land triangles. This is an improvement.

February 2012— I share the current state of the design with Ian Nicholson, Danton Spina, and Elizabeth Henwood Spina. We also play the first game, in a LONG time. It goes well, and it was a surprisingly close game (Danton won). I make useful improvements to the rules, notably to simplifying the acquisition of prestige and money; now only money is given yearly, and prestige is always immediately rewarded. ‘Hype’ still feels like it needs more of a raison d’etre. No one played the Media Card once.

NOW– We once again enlist the help of Morgan Shaw, who helped design some of the original elements of Masterplan, and is responsible for our glorious color palette in Shima. We’re hoping to find a way to deal with the enormous number of colors we’re ‘forced’ to use (part colors available at TGC) and minimize the labor of the purchaser. Regardless, I’ll be impressed if we can keep the game under $50. Still, a heck of a lot easier than remaking my previous prototype!

One Response to Making Masterplan Part 1