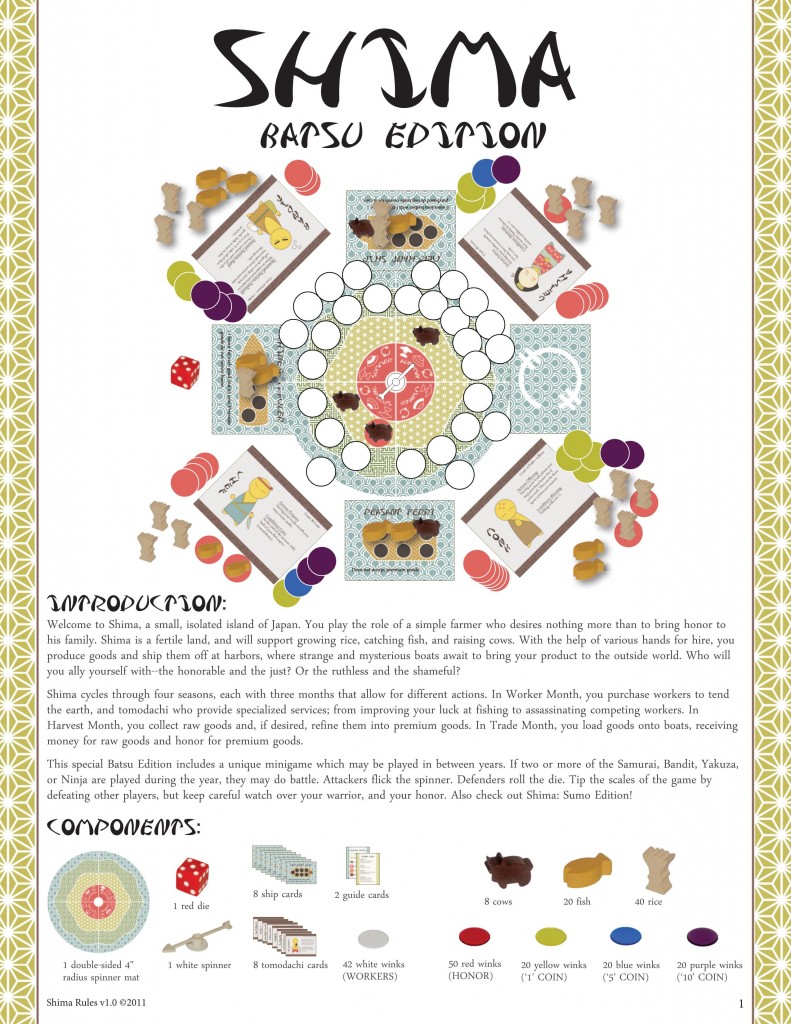 Last night Reluctant Pirate Games and I sanded off the final rough spots in our joint-effort, epically awesome game design: Shima. Because TGC is not currently set-up to support multiple game designers, and we both wanted to enter the game in the Resource Competition, our solution was to both release the same game under our own names. But how boring would THAT have been?

No… what we decided to do was take advantage of the fact that the spinner board Shima uses is double-sided. The game doesn’t need both sides, so as a way to tip the scales of the game and break-up the ‘yearly routine’ that the games cycles on, we each decided to design a separate minigame that can be played in between years! In my version, some of the tomodachi (the Samurai, Ninja, Bandit, and Yakuza) can do battle at the end of the year, affecting the honor of those who participate. In Dan’s, a Sumo wrestler you feed battles the Sumo wrestler of another player in a remarkably accurate recreation of the real sport. Both minigames are super fun, and Shima by itself, did I mention?, is a MASTERPIECE.

This was a truly collaborative effort, but not just between Dan and I. Special thanks to all of our game testers, and special special thanks to Morgan Shaw who swooped in at the last minute to remedy Dan and I’s terrible sense of color with a beautiful new palette to work with. He based it on traditional Japanese Wood Blocks, and it’s SCINTILLATING. I also want to call attention to the fact that ALL of the artwork (save the Batsu board) was done by Dan– it’s hilarious and heartwarming and poignant. The kid’s becoming quite the illustrator.

Check out both versions, BATSU (mine) and SUMO (Dan’s). Note that you can read all of the rules in the ‘free downloads’ section of each page.