Finally! GULP Action Shots! ‘Shima’ is a Finalist in the Resource Contest! 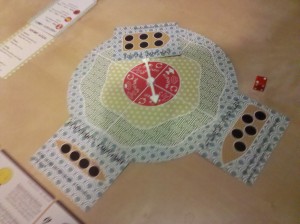 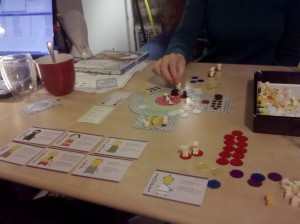 I say ‘real’ because its the first time we got to use all the designed and professionally-printed pieces, instead of scraps of paper. Yummy. This was a 3-player game between Ian, Liz, and I. Liz had never played before. Here’s the breakdown of the game:

Year 1:
We spin the spinner and Liz gets to go first. She chooses the Diplomat tomodachi, which serves her well in amassing coin quickly and for choosing the new boats that come into harbors (especially powerful in a 2 or 3 player game). I choose to forgo a tomodachi and stock-pile workers to quickly obtain rice and fish. Ian chooses the Chef tomodachi and in addition to making much sushi himself, also allows me to make 3 sushi at the cost of giving him one of them. We do this again at the end of the year, 2 sushi for me at the cost of a sake. Liz also acquires a cow off the Merchant Ship, and decides to keep it, and its baby, in the spring. By the end of the year, I had amassed the most honor, Ian was second, and Liz was third. There was no Batsu Battle.

Year 2:
Liz chooses to forgo a tomodachi , Ian purchases the Bandit (with help from the sake I paid him), and I purchase the Samurai. I attempt to block Ian’s Bandit attacks throughout the year, but he still makes off with our goods like, well, a bandit. I look forward to returning him in kind in a Batsu battle. By the end of the year, Ian is close behind me in honor, and Liz, despite having a massive amount of ‘pent-up’ honor between 2 kobe and several sake, is trailing far behind in actual standing. Batsu Battle between Ian and myself: Ian attacks as the Bandit using his x2 attacks, I defend as the Samurai (who never attacks). Using only my counterattacks, I defeat the slovenly Bandit and gain +2 honor. Bwahaha.

Year 3:
Liz again forgoes a tomodachi (or so we think). Ian purchases the Ninja, and I the Yakuza. He spends the year assassinating me as much as possible, and I continually shame and extort him to stop him from catching up to me. Liz actually purchases the Monk tomodachi in the Winter (as she needed to amass fish first), and out of nowhere starts catching up in honor rather quick. Nearing the end of the game, she has converted all of her potential honor into actual honor, and purchased a sizable additional amount with the Monk through ‘offerings’. Despite her best efforts, the game ends with me still ahead in honor by 1. Hahaha–but WAIT– we make the decision that the game should really end with a final Batsu tournament, even if you aren’t at the end of the year. Awesome. I use two of my fish to increase my die rolls by one, and as the Yakuza, battle Ian’s Ninja. Ian actually decimates me pretty quickly using his ability to ‘respin’ once per attack, but I have a final glimmer of hope using my ability to do one final attack at the moment of death. Alas, it fails, and Ian’s victory as the Ninja knocks me down 2 honor points. Liz wins the game.