PRENOTE: Yikes! Just went to update the Terra Neo rules link and saw this draft post that’s been sitting here for 8 MONTHS. Well, here it is 🙂

In 2013, I attended one in Manhattan. The prompt was to design 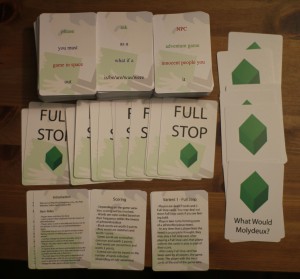 a game based on one of Peter Molydeaux’s tweets (a fake twitter profile set-up parodying Peter Molyneaux’s game design style). I wasn’t particularly familiar with coding or video games, so I ended up on a team where we made a card game. It was fine, but I was sad I didn’t learn anything about video games.

In 2014, I attended the one at the NYU Game Center. The prompt was: ‘We don’t see things as they are, we see them as we are.’ I had been using Unity for a couple months and had even made my first Oculus Rift build, so I was hoping to make a VR game. My friend Dan talked me out of it. Instead, with Dan, Morgan, Danton, and some people we’d never met before, we made a sidescroller called Walkabout where you play as a kangaroo and can either kick things or jump. Kicking things makes your kicks more powerful and the game procedurally generates more things to kick. Jumping makes your jumping more powerful and the game makes the terrain taller and thus harder to jump over.  It was fun! After it was over, I kept working on the game to improve my Unity skills. In particular, I enjoyed adding Apocalypse Mode. Check out the latest build here.

This year, 2015, Dan, Morgan, myself, and Max Dumas (who worked with us in the 2014 game jam) were finally willing to work on a VR game, boosted by my confidence that I’d been making VR stuff for a year and felt very comfortable with it. The notion of a VR game attracted a lot of people, and at one point our team size grew to an unruly 12. The prompt was simply ‘What do we do now?‘ After batting around a few ideas including playing as a ‘fixer’ and playing as a Bowser henchman after Bowser dies, we settled on being a space pilot about to ride into battle who finds that their ship breaks down right when they were about to ride into battle. We liked the idea of hyping a player up into thinking they’re about to take part in an epic space war, then taking that away and leaving them alone in the dark without any instructions. Once we settled on the process of ship-fixing being similar to Mastermind, it seemed totally doable within 48 hours.

Frankly, I had a blast. I was staying with Dan and commuting to Washington Heights, but I continued to work on the game on the train. It felt great to have enough coding knowledge that I could actively work on a lot of different parts of the game. I put together the VR components, the skybox, the cameras, helped with 3D modeling buttons, ship design, and we all voice acted (which was a ton of fun). In the end, I managed to make builds for both the magnetometer android VR and the clicky-cardboard VR, and both ended up with button issues, making it difficult to complete the game.

And yet, when it came for awards, our game was nominated for both Best Game Visuals and Best Game Audio and WON for Best Game Audio. Weee!! That meant that Thursday we were invited to showoff our game for playtesting. And that was awesome.

To play the game, tap the screen. Then during the opening ‘cut scene’, avoid being hit by asteroids by using the fire/move buttons above your console. Click the buttons by looking at them and tapping the screen.

When the cutscene ends, activate buttons by looking at them and tapping the screen. Deactivate them by doing the same. Check your progress with the big red button.

Here’s the different builds of the TIGER9:

Hear me talk more about all this in Episode 03 of WACTS (Watch Alex Coulombe Talk Stuff):

By ibrews On January 7, 2015 · Leave a Comment · In Artwork, Game Release, Terra Neo, The Game Crafter

Remember that awesome contest-finalist game designed by myself and Reluctant Pirate Games?

Well now there’s a deluxe edition! And you can BUY IT HERE: https://www.thegamecrafter.com/games/terra-neo-deluxe

Or just take a look at the rules. 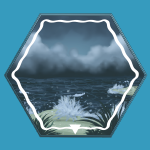 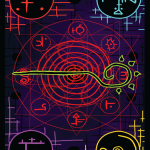 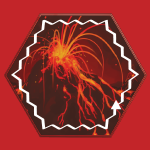 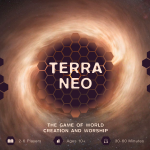 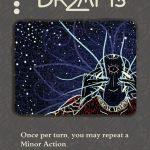 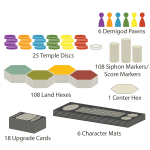 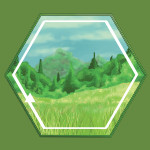 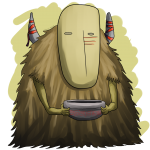 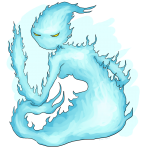 Alice Blank’s gorgeous artwork can finally be seen by the world! And there’s other neat improvements too, including:

Wow! Once again, way too long without an update. Rather than create a separate post each thing going on lately, let’s just talk about it all at once. Here’s what’s happening:

Has been reviewed by Dave for To the Table and Father Geek! Both of them were remarkably thorough and had a ton of awesome things to say, which is incredibly encouraging. Dave made an lovely video which actually does as good a job explaining how to play the game as I ever could, so check it out if you’d like to learn (and hear his thoughts):

Despite some stellar comments, Father Geek couldn’t give the game the ‘official’ seal of approval because of parents’ mixed reactions to the subject matter (interestingly, Rum Run recieved the Child Seal of Approval but not the Parents. What is this, Spongebob Squarepants?). Understandable, but yeah, just make it about rootbeer! Or teach your kids about a very real very problematic period of American History. Anyway, there’s still a review incoming from Gamers Remorse, but I’m so thrilled by what’s been said so far that whatever they say can only be frosting on the cake. Woot! Planning on smoothing out a few event/objective cards I don’t like then finally buying myself a copy 😛

Not doing too much with this right now. Where I left off, I was trying to get the online high-score table to work, which I think I was very close to doing but just ran out of time. I still think it’s a fun game! Loved getting the sky to fall. If nothing else, it serves as a great 2D tutorial and sandbox for me to keep coming back to. 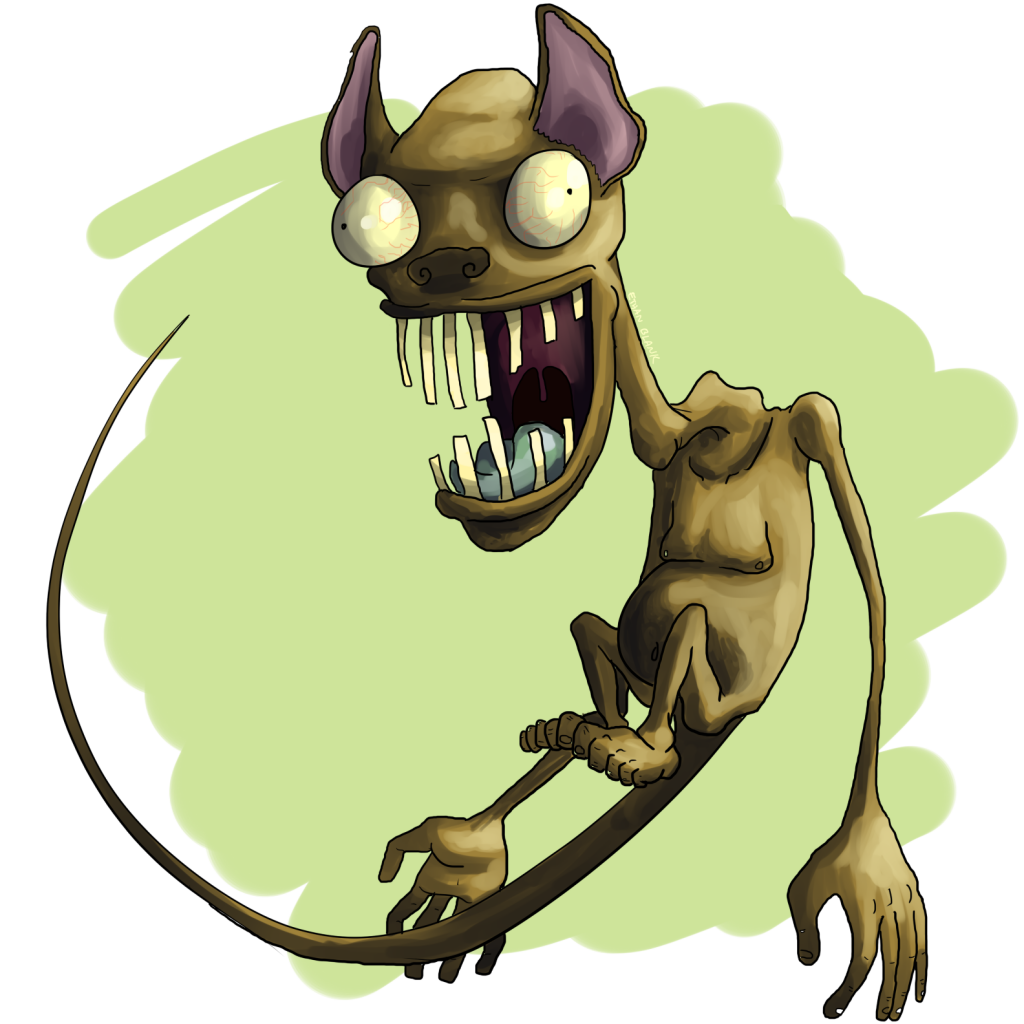 Here’s my guilty spot. This summer I managed to get Alice Blank into my production of Dystopiapiapia. She’s a phenomenal actor and it was a huge honor. Our last interaction though, was when I asked her if she might make some of the artwork for Terra Neo (this is like a year and a half ago now), and this all came with the promise of me getting her a free copy of the game ASAP to use as a porfolio item. Then I got hung up on the rules or something came up or excuses excuses excuses and I haven’t touched it for months. Here’s the dumb thing– really all that needs to be done is some fine tuning with the color palette and new rules. That’s it. So why the heck don’t I ignore the rules, get myself and Alice a copy, enjoy the freaking’ game, then make the rules later? Doy. Hopefully I can do that soon.

While nothing has been done, I will say that Dan and I are gearing up to take another pass at it and imagine what a Game Crafter version would look like. 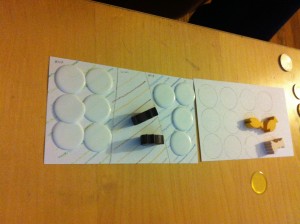 Amazingly, there’s a couple people in my office talking about getting a bunch of my boardgames for Christmas, so I really should be making everything as great as possible. Shima has been looked at by Dan and I a couple times in the past, but he wants to do a genuine overhaul of the entire game. I just want to fine tune a couple things and maybe make the rules more clear. We’ll see.

While I haven’t actually made an Oculus Rift game yet, it’s only a matter of time, so I may as well talk about what I am doing with it here. Basics: my office got the DK1 in December of last year and I immediately jumped into learning Unity and Javascript and made some interactive versions of our theaters for XIQU, the Rose Theater, Utah Performing Arts Center, and the Park Avenue Armory’s production of Macbeth. It was great– depth perception and rotational head tracking really helped you feel like you were there. Problem– if you move your head, nothing happens. Well, in a theater, whether you’re trying to look between the heads of the people in front of you,or lean over a balcony rail, there’s plenty of subtle movement affecting sightlines that the DK1 was unable to capture. Enter the DK2– just got it working yesterday with one of our projects, and that took getting a new graphics card (NVIDIA GTX 970), a power adapter (Dell prebuilt computers… yikes to work with). But hey! Higher definition display, and MOTION TRACKING. My boss loves it. There’s a few little judder things I gotta work out, but after that, I’ll start to feel comfortable imagining some much more ‘game-like’ elements to work on, be it for my office or for some crazy new project. 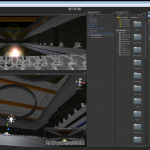 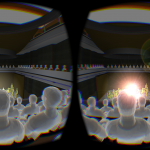 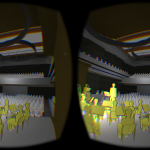 My wife and I have been playing a lot of Race for the Galaxy (which Liz usually wins). We also love a new (old) game by Sid Sackson called Acquire. Besides that, we’ve had single games of Dominant Species, Root Word, and Scrabble.

I want to make a board game about the meat industry. Here’s two words no one likes to hear together: educational and fun!